Gordon & Grace are based in Edinburgh, Scotland. 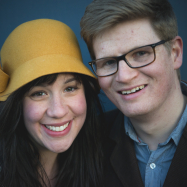 In 2005 Gordon moved from his small hometown in the west of Scotland to begin studies at the University of
Edinburgh, around the same time that Centrepoint Church was being planted. One of the first Scots to
connect with the church, he soon became involved in the music ministry, growing in his passion for Jesus, and later going on to oversee and lead the worship
teams at Centrepoint.

Grace moved to Edinburgh from North Carolina as part of the original team that launched the church, as well as studying at the University of Edinburgh. Grace has been a core part of Centrepoint from the church’s earliest days, being involved in everything from hospitality to community groups, and from mentoring to ministry to women
involved in Edinburgh’s sex industry.

She and Gordon met at church, and through leading a variety of community groups
together saw their friendship blossom into romance! They were married in 2011.

Having served as volunteer leaders since their student days, the Wrights are excited to be responding to God’s call to enter full-time ministry, inspired by a vision to see new churches planted and communities transformed by the gospel, in Edinburgh, in
Scotland, and beyond!

Together with their sweet baby son Abraham and irrepressible puppy Maisie, Gordon and Grace are delighted to call Edinburgh their home, and look forward to all God has in store for their city and nation.